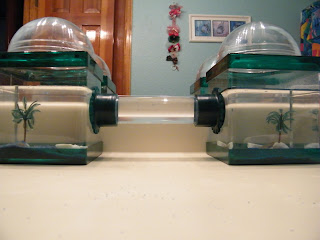 A couple months ago, I (Lisa) wrote a blog post about my family beginning a pet-owning adventure. Until recently, I would have had nothing but wonderful things to report. Squirmy, our beloved tadpole, grew legs, then arms, and lost most of her tail (after extensive research, we discovered Squirmy was a female).
I had ordered a Stage Two tank for the frog portion of Squirmy's life (see picture at right). That tank recently arrived, and with it another frog, whom the kids have named Jumbo. Jumbo is definitely a big frog compared to Squirmy, about three times as long and at least four times as hefty. Squirmy would dart around her tank; Jumbo swims the frog version of a portly man's gait.
As I reviewed the instructions that came with the tank, I had a hunch that putting Jumbo and Squirmy in the same tank would not bode well for Squirmy. Further research confirmed my intuition. The introductions would go something like this: "Squirmy, meet Jumbo. Jumbo, meet food." So I placed each frog in a separate tank; a tube connected the tanks, so I adhered a cap on one end of tube to separate the frogs. The research I'd done said that when Squirmy grew close to Jumbo's size, they'd view each other more as friends and less as food and diner, respectively.
I had planned on writing a blog post using the frogs as a metaphor. The message of it would have gone something like "Don't let the huge image of your dream eat your currently smaller reality." Sometimes when we begin the journey toward fulfilling our purposes, we can envision a dream so daunting that we abort our efforts to realize it. The metaphor seemed like a fabulous comparison.
Unfortunately, I never had the chance. A couple days ago, I noticed that Squirmy appeared smaller. I wasn't overly concerned; she was much smaller as a frog than she had been as a tadpole. I figured perhaps she was still shrinking. However, I must admit I hadn't seen Squirmy eat much since making the transition from tadpole food to frog food. I didn't know if she was eating, and I didn't know how to teach her to eat.
Yesterday, when I walked near the tank, Squirmy didn't come see me, which had been her usual habit. Instead, she floated with her head toward the surface of the water. She didn't react when I tapped on the tank's side. I feared the worst, and surely enough, when I poked her with the frog food spoon, I had to face the fact that she had indeed died.
So now I had a new experience to face: telling my children that their pet had died. I dreaded it all day, and saved the news until we finished all appointments and homework. At first, the kids took the news much better than I'd expected, especially my daughter. We threw Squirmy a funeral a la Cosby Show, full with appropriate attire, eulogies, and to our ultimate detriment, my husband's version of "Taps." It was then that sadness hit Princess Monkey Girl. I actually think it was good that she eventually felt her grief, but those of you who are parents know how hard it can be to watch your child mourn. 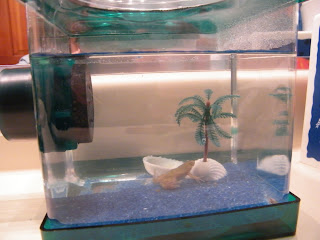 So what's the metaphor now? Squirmy was an active, darting type of frog, a teeny thing with lots of energy. She really captured our hearts. We witnessed her metamorphosis, and looked forward to her growth as a frog. Now, suddenly, she's gone. But had we not gone down this path, we would have missed Squirmy's bright animal spirit, and we never would have met Jumbo (in picture above). We now have a full-grown frog to love and enjoy.
Perhaps the metaphor is this: sometimes, as we begin to live the first steps of our dreams, life surprises us. We enjoy the journey while we can, and face and grieve losses that may come. As difficult as they may be, those losses may propel us further toward our intended purpose than we would have gone without them.
So, Squirmy, thank you for gracing us with your life, for showing us the wonder of metamorphosis, for bringing us so much joy. We will remember you, and miss you, and feel grateful for the time we had with you and the lessons we learned about life through you.
Posted by Unknown at 4:16 PM