I don't know about you, but these days it seems everywhere I drive is a Cone Zone. One highway sports an electronic sign warning me "Construction/Major Delays/Alternate Route Advised." Then, when I drive onto the Alternate Route, it has its own line of orange soldiers detouring me toward places I don't want to go. Makes me want to push those pylons right out of the way.


In this week's podcast, we explore the topic of Pylon Pushing in our lives, the capacity to explore and heighten beyond artificial boundaries set before us. We talk about using improv when we want to see exactly where true boundaries lie.

We hope you enjoy this podcast and look forward to your comments on where you might be Pylon Pushing in your own lives!

Posted by Unknown at 1:28 PM No comments:

Hello, and welcome to the inaugural Brilliant Chaos podcast! We are starting our podcasting adventure with the theme "New Beginnings." You can hear our first episode by clicking on the arrow in the upper left corner of the player above.

We hope you enjoy our podcast, and look forward to your comments, questions, inputs, and non sequiturs. And please let us know if you can identify the term for phrases such as "new beginnings," terms with two words that mean the same thing (and, apparently, we don't mean synonyms or redundancies!).

P.S. We also invite you to incorporate the word "maventurous" into your vocabulary soon and often!

A Time to Rest

I never thought I'd feel good about not dancing. I am a dance-aholic! I love my Nia workouts. I thrive on moving my body. If I don't, I become fidgety, my body starts to ache, and I feel less able to focus.
But I've had to let my dancing go for now. At my house, we're enduring the final weeks of our marathon summer break, forced on us due to my kids' school constructing a brand new building that will open in ten days (but who's counting?). And we've all had enough of vacation. Even my kids have proclaimed their wishes to return to school. They want to see their friends. They're ready to start classroom learning again. And they're getting on each other's last nerve.
Hence, my current dancing hiatus. While my kids are old enough to be left alone, they no longer have the wherewithal to get along, both in my presence and even less so in my absence. If I leave them while I go dancing, I have no guarantees that I won't return home to tears, and I'm not willing to gamble like that. The places where I dance don't have childcare for kids my kids' age, so I've decided that for the last couple weeks of summer break, I'll forego my dancing routine. It's not ideal, but I'll survive.
What I didn't expect was that I'd actually thrive. Yes, I'd rather have the opportunity to go dancing, but not dancing has opened up other possibilities for me. Not only have I let go of dancing, I've also let go of having to be my children's constant schedule planner and entertainer. I've let go have having these final two weeks be "meaningful," of creating memorable moments and learning opportunities for my gifted kids. I think they feel that some kind of pressure, which I never intended to create, has lifted, and they can just laze around, be bored if they want to, and if they don't, create their own entertainment.
As well, my body seems to be responding to the rest. I have a few aches and pains that will probably diminish now that I'm taking a breather. I hope that when I can return to dancing I'll have more energy and fewer twinges throughout my body.
And last but not least, while I've devoted fewer hours to exercise and less mental energy toward managing my kids, I've actually accomplished something huge! Today I cleaned out and organized my office! I still have a ways to go, but I've made a huge dent in an area that has felt out of control to me for a long time. I've moved things around, created space for a bookcase to make its home here, and released energy-draining clutter. Amid this cleaning frenzy, I've still moved my body, and I've made pathways for physical, mental, emotional, and spiritual energy.
So while I'm looking forward to returning to my dancing, I can say that I believe in the assertion that "There's a time to rest." I find that as a gifted person, I tend to create grand schemes for my life, and I can be somewhat rigid about making them happen. But sometimes releasing my agenda is good. In fact, sometimes restful periods can be surprisingly and ironically productive.
Posted by Unknown at 6:22 PM 4 comments:

Growing a Frog in the Comfort of Our Home! 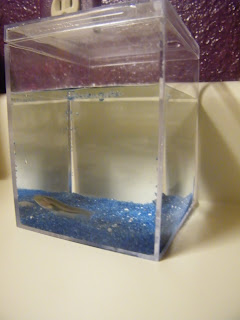 Meet Squirmy the tadpole. He (or she--we're not sure) is the newest addition to our family. The requirements for pets around here rival those for gaining a top secret security clearance, so Squirmy is our best bet: no mess and low maintenance. (Unlike Skippy from our previous blog post, Squirmy won't leave "presents" on the neighbor's lawn.)
Squirmy arrived today after weeks of waiting. We bought the Grow-A-Frog kit and mailed in the gift certificate, and until today I've listened to multiple despairing questions regarding Squirmy's ETA. Fortunately for my sanity, a small styrofoam package came with today's mail, and our pet owning adventure has begun.
I anticipate this will be an interesting experiment on three fronts. First, I look forward to watching a tadpole turn into a frog. I've never seen this metamorphosis up close and personal, and it intrigues me. Second, I can't wait to see my kids' reactions. They totally dig this kind of learning. Already they've shown so much excitement over Squirmy, and as s/he changes, I imagine my children will bring an energy and joy to the process that will fuel my own. And third, this experiment will show us how well the kids can care for a pet. Who knows--if they show themselves to be unlike most other children and truly take the responsibility they've promised to take with Squirmy, the pet restrictions around here may lift, and we'll actually be able to own a higher maintenance pet...like a sea monkey.
Time will tell...
Posted by Unknown at 8:34 PM 7 comments: 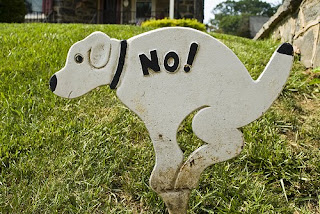 It was a dark, dark night...very dark. Skippy, dear Skippy, needed to go for his late evening walk. And since I was the official dog sitter, it was my turn for dog duty. I put on his "you'll feel sharp electrical current if you do not behave" collar (Skippy was a big, big dog), got out the plastic bag for the anticipated dump, put a key to the house in my pocket, and off we went. Everything was fine until we got to block number three, third house on the left...the sniff-around-and-time-to-poop location (all dog owners know what I'm talking about). Skippy did his business. I then proceeded to fulfill my part of the program, but for the life of me could not find the poop. The house lights did not extend far enough into the yard to be of any help. I could not find it!

So. Now what? Well, first of all, the title of this blog came to mind and I laughed. Second, I went through my options...do I go back to the house, get a flashlight, and come back to do a search-and-pickup? Do I knock on the door, at this late hour, and let the occupants of the house know I'll pick up the poop the next day? Do I just continue on our walk and bless this neighbor's yard with a "gift" to help their soil receive additional, needed, and helpful nutrients?

Well, dear Planet Chaos friends, I must admit I went for option number three. I know, I know. I totally wimped out. My sense of responsibility is stilled pricked as I think about it. As I write this now, I'm wishing I had gone back to get a flashlight (or knocked on the neighbor's door, lol)...it would have made for a much better story on many levels. ;)

What is your relationship with nature and animals? I'd love to hear your stories of successes, failures, dilemmas, and learning opportunities of taking care of our planet (Earth, that is).

It's 3:31 a.m. Mountain Time, and I can't sleep. It seems I still have energy coursing through my body from the brainstorming session Wendy and I had about Brilliant Chaos. Instead of tossing and turning anymore, I give in, shuffle to my computer, turn it on, log onto Facebook, and discover that Wendy not only has been busy launching this blog site, but she's still awake too!
This is what happens when Wendy and I collide on creative ventures. We don't get much sleep, but we sure have fun! And we look forward to bringing this kind of energy, wonder, exploration, and hilarity--along with provoking plenty of thoughts and reaching people's hearts--to the place where giftedness and systems thinking meet.
So fasten your seat belts, folks! (Stow your tray tables, and return your seats to their original, upright positions.) This rocket ship is taking off! Destination: Planet Chaos! Enjoy the ride!
Posted by Unknown at 3:30 AM No comments:

Welcome! Welcome to Planet Chaos I say! Lisa and I are so glad you came by! At this, our dawn of a new blog, we, your guides to this complex yet fabulous planet, appreciate your visit and invite you to come by often.

Let me give you an introductory tour of Planet Chaos. Planet Chaos is the "third entity" of friends and mavens Lisa Lauffer and Wendy Balman. A "third entity" is what is created when we are together. Its that energy and space between us that is alive with spontaneous fun, depth, divergence, reciprocity, pylon pushing, creativity, maventurousness, sparkiness, movement, etc. in service of bringing the qualities of the gifted life and mysteries of the systems around us to light!

Planet Chaos is our playground as we draw out the wisdom of the vast research of the world of giftedness as well as systems theory. Everyone is welcome on this planet and if you have even one bone of fun or wacky, you'll enjoy our blog posts, twitter tweets (see posts on right side of this page), and even upcoming podcasts and videos.

Stay tuned! We have a wealth of enjoyable learning and fun ahead!

And, this is place for you to play as well. Please feel free to not only read, subscribe, and listen to our podcasts...but post your comments and lets have a conversation! Or two...